The third movement from La Catedral, composed by Agustin Barrios: Allegro solemne. Edited with these patches here: open strings, non vibrato and tirando in different positions and of course the real slurs.

This beautiful piece from the first movement of the Ibéria Suite, composed by Isaac Albéniz for piano, has been arranged for and performed often on two guitars. Here a snippet in the duo version.

In Recuerdos de la Alhambra, written by the Spanish guitarist and composer Francisco Tárrega, this famous tremolo piece needs a convincing Round Robin. This version is a bit shorter than the original piece, no repeats.

A small improvisation in the Bossa Nova style, where the solo guitar starts improvising. You will hear a quartet with a second bossa guitar playing the chords, upright bass and drums.

The famous Milonga, written by Jorge Cardoso, a guitarist and composer from Argentina. Also made with Performance patch - non vibrato. A very nice fast composing tool for a quick mockup.

A highly personal arrangement for two guitars (made in 1994 by Erik Otte for the former Netherlands Guitar Duo) of this beautiful song from the West Side Story.

The original title is Serenata ingenua, written by Rodrigo Riera for guitar solo. It is a typical, very sentimental piece in the Venezolan style with a molto rubato way of singing/playing. Here in an arrangement of Erik Otte for two guitars.

Added a walkthrough about how to use Evocación in Dorico 4. 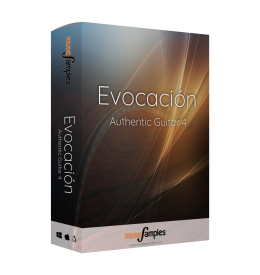 Intro pricing until 1st of February 2023